In My Mailbox is a weekly meme hosted by Kristi over at The Story Siren which gives bloggers a chance to share the books, swag, etc. that they've received each week.

Another large haul this week because of the gap from last time because of my hiatus status. I've been lucky to get a couple of things delivered by DHL during the postal strike but it's still delayed a few books. Fingers crossed that our mail is back next week! 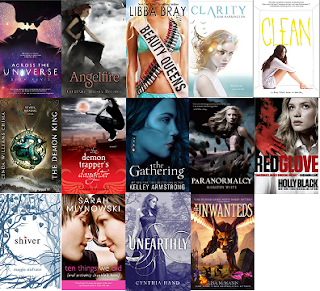 So, no real picture this time because I'm at my cottage right now. I made a collage on paint for you though that only took... oh, 3.5 million years.
Review Books (both from S&S Galley Grab)
Clean by Amy Reed - I've read Amy's other book and I really liked it. This one sounds like another great emotional journey. Excited to start it!
The Unwanteds by Lisa McMann - DID YOU SEE THAT BLURB?? "The Hunger Games Meets Harry Potter." I will read it and devour it and love it forever (I hope). This looks like something my sister would enjoy as well :) I love some good MG and Lisa McMann's books have been great so far.
Library Books
Across the Universe by Beth Revis - I was so excited that this one finally came in! It sounds really interesting and mostly everyone I know﻿ that's read it has loved it. It's not really my typical read but I have a good feeling nonetheless.
Angelfire by Courtney Allison Moulton - I've started this one and I really like it so far. Lots of fighting and Will is pretty spectacular.
Clarity by Kim Harrington - Another one I've checked out because of good recommendations.

The Demon King by Cinda Williams Chima - I actually got this one before but I had to return it before I could read it. I loaned it out to a friend though (loaned a loan?) and despite how picky she normally is, she said it was good.
Red Glove by Holly Black - I neeeeed to read this one after finishing White Cat. NEED TO!
Ten Things We Did (And Probably Shouldn't Have) by Sarah Mlynowski - This book sounds cute, fun and the author is Canadian. Win.

Won (aka I enter too many contests)
So, a while back, I won an Inkpop challenge (for commenting, not writing) and I was supposed to get Starcrossed by Josephine Angelini as well as 3 other books of my choice from the Harper catalogue. Starcrossed came in a while back but the others only just arrived. I chose...
The Gathering by Kelley Armstrong - I love Kelley's other series (reviews here, here and here) and so I'm super eager to delve back into the world.
Paranormalcy by Kiersten White which I've already read and loved (review here) aaaand I'm starting to sound like a self-promotion ad. Oh well. The links are there for you to click if you want to.
Unearthly by Cynthia Hand is soooo pretty and shiny and purple <3 I've heard the story is pretty fantastic, too!
Beauty Queens by Libba Bray was won from Irish at Ticket to Anywhere. This books looks awesome - hilarious, insightful and refreshing. I wish I didn't have so many books to read before it!
The Demon Trapper's Daughter by Jana Oliver (+ swag) - I believe I won this one from a giveaway hop... could be wrong though. It's from Karen at For What It's Worth and it's signed! So excited, so thank you very much to Karen :)
Free Stuff!
Shiver by Maggie Stiefvater is a free audio book that's available for a limited time at Audio Book Sync until the 29th of this month. I've only listened to Part 1 of 9 so far but I'm really enjoying the experience of my first audio book so far!
-
That's it. Tadaaaaaa! If you actually read through all of that, I'm amazed. Give yourself a complimentary pat on the back (uh-huh, I'm lame). I'm looking forward to seeing what everyone else has gotten over the week!
Posted by Sonia at 07:00

Email ThisBlogThis!Share to TwitterShare to FacebookShare to Pinterest
Labels: IMM