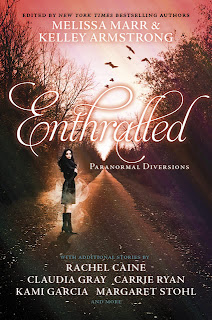 A journey may take hundreds of miles, or it may cover the distance between duty and desire.

Sixteen of today’s hottest writers of paranormal tales weave stories on a common theme of journeying. Authors such as Kelley Armstrong, Rachel Caine, and Melissa Marr return to the beloved worlds of their bestselling series, while others, like Claudia Gray, Kami Garcia, and Margaret Stohl, create new land-scapes and characters. But whether they’re writing about vampires, faeries, angels, or other magical beings, each author explores the strength and resilience of the human heart.

Suspenseful, funny, or romantic, the stories in Enthralled will leave you moved.


This review is going to be a little different. I took notes while reading for all of the stories, so here is a tiny review for each of them.

I liked this one! It had a simple writing style, but I think it really worked in this case. The story itself was very sweet and I loved the tight sibling bond between Cairo and Ravenna.

As always, the quiet and poignant desperation of Ryan's stories left me breathless by the end. I liked the emphasis on making choices and the stark reality of the urgency in survival. I have to say that I also really liked the younger sister, Sally!

This one was a really interesting story - I only wish that it could have been expanded into something a bit longer. While it started off a little mysterious (that was the point, I believe), it definitely picked up by the end. Once the story reached its climax, things got intense!

Things About Love by Jackson Pearce

I loved this story! It was a really sweet, hopeful portrayal of desiring love. It was wonderful to see just the yearning for it and not necessarily TRU LUV 4EVA. If anything, I now can't wait to read As You Wish!

Wow, do I ever want to read the Soul Screamers series now! My favourite parts of this story were those that delved into the lore. The story has creatures I don't normally get to read much of, so it was a nice change of pace. My favourite character in this one was definitely Syrie, who I found fascinating.

I really liked it! It felt a little choppy at the beginning, but it's always tough for a short story to flow as smoothly as a full-length novel from the get-go. Still, it was sweet and fun.

Besides, I am game for anything with Donia and Keenan because, really? SO CUTE.

I know I'm saying this a lot but: LOVED! Kelley Armstrong does a fantastic job of reminding readers of past events (the Darkest Powers trilogy) without bogging down the story. This short story was fun, suspenseful and sweet.

(For those that have read the DP trilogy, our favourite wolf is back in this one <3)

Ahh, my favourite one! This was hilarious, heart-warming and it's almost ridiculous how much I loved it. It was fabulous to see the band come together and there were some really funny lines, as is always the case with Sarah Rees Brennan. Even amongst the less serious parts, there is some depth.

A story that is both hopeful and strong.

I liked the prose in the novel, but I'm really not the best judge of that, so don't take my word for it. Even without that though, the story had really great pacing and managed to explore quite a bit for a short story. Although there aren't very many words, they pack a powerful punch. Nice job!

Oh, this story was so good. It is heartbreakingly desperate.

Kimberly Derting is a master at building up the tension and suspense. The story is short but impactful and I'm really excited to meet Rafe in Desires of the Dead (I've read the first novel, but not the second). This one had a different tone from a lot of the other stories (they all had different tones, really) and it was a nice break for the nature of the book.

I love Ally Condie's writing - both here and in Matched. Sara, the main character, was very compelling and her emotions were perfectly portrayed for me. I thought the whole concept of the Globe, and the story in general, was unique and interesting.

Fun, fun, fun! This was a very creative, imaginative piece. I found it entertaining and just so much fun. Really though, I'd love any story with the Rocky Horror Picture Show references this one had (there are a LOT).

First off, I want to say that I love this title. I think it's so inventive and clever.

Unfortunately though, I found this story a little boring. The concept was interesting enough but something about the execution just didn't click with me.

I really liked this! There were some very strong emotions that came through and I was utterly entranced by the sections on gargouilles and flight. Also, guys, there is something about Étiennes. Are they all this awesome? Is there like an unwritten rule somewhere that says all Étiennes must make my heart melt?

I really like Barnes' writing style. Don't ask me what about it I like because I'm horrible at explaining that. I found this story so interesting! I want more. While the ending truly doesn't have much resolution at all, it worked for me and I liked how it almost came full-circle.

I have to say, I've never really been interested in the Morganville Vampire series before (there's SO MANY BOOKS) but the joint forces of this story and Jen's ABCs of Morganville Vamps list have swayed me. I really liked this story!