The Unbecoming of Mara Dyer by Michelle Hodkin 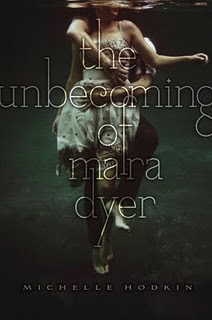 The Unbecoming of Mara Dyer by Michelle Hodkin


Mara Dyer doesn't think life can get any stranger than waking up in a hospital with no memory of how she got there.


She believes there must be more to the accident she can't remember that killed her friends and left her mysteriously unharmed.


She doesn't believe that after everything she's been through, she can fall in love.

The Unbecoming of Mara Dyer is... wow. I don't even really know what to call it. Creepy, romantic and compelling are some of the words that come to mind!

To be honest, I was a little hesitant to read this novel. I kept going back and forth - from some reviews, I thought it would be the crafty tale that it is; but from from others I thought that it would be more of a disturbing thriller. While there are some creepy elements, it makes for an exciting read rather than something that would scare my easily frightened self.

After moving to a new town to get away from the constant scrutiny she is receiving, Mara enrolls at Croyden Academy of the Arts and Sciences for a fresh start. Mara is an interesting character. I related to her easily, even though her situation was so bizarre and the facts surrounding it so blurry. She has a wonderful support system with her brother Daniel and her parents have good intentions, even if they don't always quite know what to do with Mara's situation.

Then we come to my favourite character of the book: Noah. Oh, Noah. Noah is supportive, caring and gorgeous. He's on Mara's side before he fully even understands why he needs to be and... he has a British accent. Seriously, I got into a metaphorical boxing ring with Brodie and Kathy for this boy (I won, obviously).

The Unbecoming of Mara Dyer is almost impossible to put down. I started it late at night and the first thing I did in the morning was run to my computer to continue. In between cooking my lunch, I kept racing back to the computer to get in a few extra pages. I was obsessed! The plot is quick-paced with little snippets from the past peeled back until you are presented with the honest truth. The pages will fly and before you know it, you'll have reached the end, dying for more. I know I am!

Cover Comments: Now why can't we have more covers like THIS? It's intriguing and striking with a fancy font and Noah Shaw. I think all covers should have more Noah Shaw, don't you? ;)