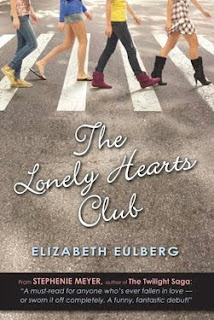 Love is all you need…or is it?

Penny is sick of boys and sick of dating, so she vows: No more. She’s had one too many bad dates, and has been hurt by one too many bad boys. It’s a personal choice…and soon everybody wants to know about it. It seems that Penny’s not the only girl who’s tired of the way girls change themselves (most of the time for the worse) in order to get their guys…or the way their guys don’t really care about them.


Let's start with a confession round: I don't like the Beatles. I don't like them at all (sincerest apologies to Penny's parents). I did however really enjoy The Lonely Hearts Club!

I think we all know at least one person - I sure do - that fits what Penny sees all around her school. What that is, is the girl who is so in love with her boyfriend that she's abandoned her other friends, hobbies and really even herself, to be with him. Do you know what I want to do for them? Giftwrap a copy of The Lonely Hearts Club and put it under their Christmas tree.

There is such a fantastic message in this novel. At first glance, the idea of this book comes off as little more than a dramatic way of dealing with heartbreak. As things move along though, it gets so much more meaningful. The Lonely Hearts Club inspires its members to think about themselves for a change and really celebrates how special and unique they all are. Throughout the novel, the girls start to realize that they don't need a guy to define them.

Penny was a very realistic character. She is understandably hurt at the start of the novel, and the way she deals with it is something I could see happening. She makes her fair share of mistakes, but what teenager doesn't? Penny's friends and the other girls in the club were all very relatable - I felt like they could have been my friends!

Finally, a message to everyone reading this: You are so beautiful. I hope you know that you don't need a guy/girl to make you sparkle.

Cover Comments: I like it! I think it represents the diversity of the girls in the club and I like the font for the title.