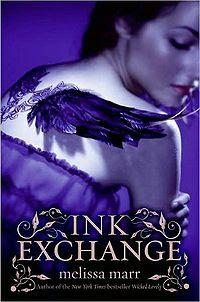 Unbeknownst to mortals, a power struggle is unfolding in a world of shadows and danger. After centuries of stability, the balance among the Faery Courts has altered, and Irial, ruler of the Dark Court, is battling to hold his rebellious and newly vulnerable fey together. If he fails, bloodshed and brutality will follow.

Seventeen-year-old Leslie knows nothing of faeries or their intrigues. When she is attracted to an eerily beautiful tattoo of eyes and wings, all she knows is that she has to have it, convinced it is a tangible symbol of changes she desperately craves for her own life.
That tattoo does bring changes - not the kind Leslie has dreamed of, but sinister, compelling changes that are more than symbolic. Those changes will bind Leslie and Irial together, drawing Leslie deeper and deeper into the faery world, unable to resist its allures, and helpless to withstand its perils.

I was worried that a sequel to Wicked Lovely (which I loved!) would lessen the appeal of the series for me but that was definitely not the case! Ink Exchange was a dark, haunting tale featuring a courageous heroine and a stellar cast of supporting characters.

The main character, Leslie, is so much more than originally meets the eye. She struggles daily to keep her emotions in check and her carefully-built façade up for the world. I really liked the inner turmoil Leslie went through - it made her seem that much more real to me as a character.

I also loved reading about Niall and Irial for similar reasons. They were both intriguing characters and in the end, I liked them both. The Dark Court is featured in this novel instead of the Summer Court, which is a stark contrast. I felt like in the last book, we only got to hear about the Summer and Winter Courts whereas in this one, we also got some more information about the High Court.

This novel is definitely a lot darker than the previous one. For that reason (and the fact that there just isn't enough Seth in this book) I'd have to say I preferred Wicked Lovely but I really did love this one as well. It's a fresh take on faeries that you don't want to miss!

Cover Comments: This cover is alluring in a creepy kind of way - it's a perfect fit! I like the tattoo and the wings especially and the consistency from the last cover. Great cover!
Posted by Sonia at 17:51