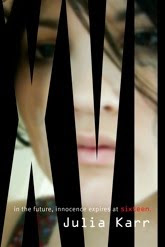 Then, with one brutal strike, Nina’s normal is shattered; and she discovers that nothing that she believed about her life is true. But there’s one boy who can help – and he just may hold the key to her past.

But with the line between attraction and danger as thin as a whisper, one thing is for sure… for Nina, turning sixteen promises to be anything but sweet.

Some girls can't wait to be sixteen, to be legal. Nina is not one of them. Even though she has no choice in the matter, she knows that so long as her life continues as normal, everything will be okay.

I really liked the vivid setting of this novel. Right from the beginning, Karr sets the scene by highlighting the differences between modern day life and the dystopian setting of the novel. The whole world was just terrifying when I thought about it more. I mean, how far off is it to think that the government could control everything by saying they were just protecting everyone?


The writing, while simple, was effective and Nina was a strong female lead. It was just really nice to read right from the beginning about a character in a sex-crazed world that didn’t want to lose sense of who she was for some random guy. Perhaps it was just more clear when compared with her best friend Sandy, the “ideal” sixteen-year-old but I appreciated her having a mind of her own even with the media infiltrating everything.


The supporting cast of characters were good for the most part as well. I really liked Wei and Derek (although I was a bit wary of him in the beginning) but I wish I could have known Mike a little better. I didn’t love Sal as much as I wanted to. While I sympathized with his situation, I wish he would have been a little more understanding about the fact that Nina didn’t grow up in the same environment as him. I preferred Wei who was fierce, unique and a great friend.


The ending came a little quickly for my taste but I like the way things were left in the end – not too sugary sweet but not in complete despair either.

All in all, XVI was a good, solid debut novel.
Cover Comments: I'm not a huge fan of this cover... I think the idea behind it was good but the XVI over the model's face isn't very clear and the colours are pretty bland.
Posted by Sonia at 21:01