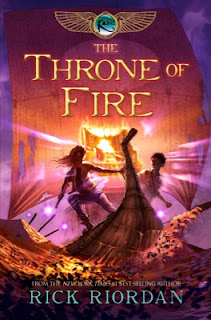 
Ever since the gods of Ancient Egypt were unleashed in the modern world, Carter Kane and his sister Sadie have been in trouble. As descendants of the House of Life, the Kanes have some powers at their command, but the devious gods haven't given them much time to master their skills at Brooklyn House, which has become a training ground for young magicians.
And now their most threatening enemy yet - the chaos snake Apophis - is rising. If they don't prevent him from breaking free in a few days' time, the world will come to an end. In other words, it's a typical week for the Kane family.
To have any chance of battling the Forces of Chaos, the Kanes must revive the sun god Ra. But that would be a feat more powerful than any magician has ever accomplished.
First they have to search the world for the three sections of the Book of Ra, then they have to learn how to chant its spells. Oh, and did we mention that no one knows where Ra is exactly?
Narrated in two different wisecracking voices, featuring a large cast of new and unforgettable characters, and with adventures spanning the globe, this second installment in the Kane Chronicles is nothing short of a thrill ride.

This is the second book in a trilogy, the first being The Red Pyramid. I really liked Rick Riordan's Percy Jackson series and when I heard he was releasing another one with Egyptian mythology, I knew I would fall in love with it just as I had with Riordan's former works.

In general, I'm a Greek mythology lover. I like Egyptian mythology well enough, just not as much. Unlike with Greek mythology, I had a very limited knowledge of the Egyptian universe and was left having to learn things through the story. Let me tell you though, by no means did that make this book less enjoyable. If you've been thinking about starting this series and haven't, I really recommend you give it a try!

Anyways, about the sequel now! The ending of the last one was a complete shock (to me, anyways) and there were a lot of things left unexplained. I'm most looking forward to reading more about Zia! Her and Carter are adorable together. I also really like the relationship between Sadie and Carter - two siblings that are only just getting to know each other well. The family dynamic in there is hilarious and I'm looking forward to more teasing and sibling banter.

Pretty cover, too! I like my pretty covers.
Posted by Sonia at 17:17