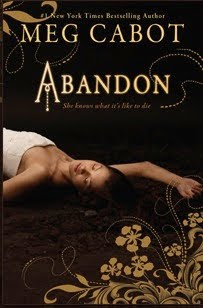 She knows what it's like to die. Now Death wants her back.

Seventeen-year-old Pierce knows what happens to us when we die.

That's how she met John Hayden, the mysterious stranger who's made returning to normal life—or at least life as Pierce knew it before the accident—next to impossible.

Though she thought she escaped him—starting a new school in a whole new place—it turns out she was wrong. He finds her.

What does John want from her? Pierce thinks she knows... just like she knows he's no guardian angel, and his dark world isn't exactly heaven. But she can't stay away from him, either, especially since he's always there when she least expects it, but exactly when she needs him most.

But if she lets herself fall any further, she might find herself back in the place she fears the most.

And when Pierce discovers the shocking truth, that’s exactly where John sweeps her:
The Underworld.

So last week I featured The Goddess Test by Aimée Carter, another re-telling of Hades and Persephone. Most of what I have to say about my love for the myth is stated there so if you're curious and missed it, go check it out here!

I love everything that I've read of Meg Cabot's even though it has been a while since my last book of hers. I'm really interested to see where she goes with this story since it does sound a lot darker than her normal work.

Kristi from The Story Siren did a Fragment Friday post back in March about Abandon where she read out a couple of pages and just that little bit was fantastic. I can't wait to read the real thing!

Two re-tellings of Hades and Persephone coming out on the same day and I could not be happier - three cheers for Greek mythology!
Posted by Sonia at 21:51