The Body Finder by Kimberly Derting 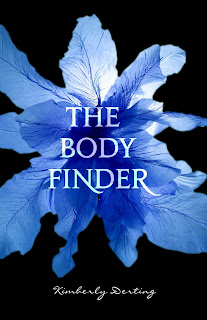 The Body Finder by Kimberly Derting

Violet Ambrose is grappling with two major issues: Jay Heaton and her morbid secret ability. While the sixteen-year-old is confused by her new feelings for her best friend since childhood, she is more disturbed by her "power" to sense dead bodies - or at least those that have been murdered. Since she was a little girl, she has felt the echoes the dead leave behind in the world... and the imprints that attach to their killers.

Violet has never considered her strange talent to be a gift; it mostly just led her to find dead birds her cat left for her. But now that a serial killer is terrorizing her small town, and the echoes of the local girl he's claimed haunt her daily, Violet realizes she might be the only person who can stop him.

Despite his fierce protectiveness over her, Jay reluctantly agrees to help Violet find the murderer - and Violet is unnerved by her hope that Jay's intentions are more than friendly. But even as she's falling intensely in love, Violet is getting closer and closer to discovering a killer... and becoming his prey herself.

The Body Finder is a perfect blend of romance and suspense that will keep you flipping pages until the very end.

I honestly ate up the relationship between Violet and Jay. The fact that they had been best friends since childhood made their love for each other seem much more realistic and a lot sweeter as well. I liked how attentive they were to each other's feelings and emotions - they fit together like a puzzle piece. I won't lie - there were times where I was reading and literally wanted to yell at the pair to hurry up and kiss already, but their closely knit friendship was enough to keep me satisfied.

Along with the romance came some heavy doses of mystery, something I also really loved. I'm a big fan of crime shows so the type of suspense that The Body Finder provided was right up my alley. When the book first delved into the murder story, I think I might have held my breath until it was over - it was that good. I really admire the way Derting laced together the high school love story and the creepy murder tale without making it sound choppy or predictable.

I am so eager to get started on the next book, Desires of the Dead, and see what Kimberly Derting has in store for us! I absolutely loved it.

Cover Comments: It's alright. There's nothing fancy to it, but I can kind of see how it has that echo-ish feel to it.