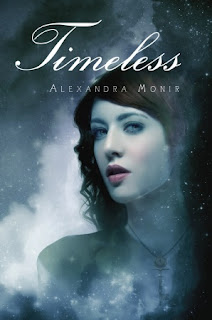 When tragedy strikes Michele Windsor's family, she is forced to move from Los Angeles to New York City to live with the wealthy, aristocratic grandparents she has never met. In their historic Fifth Avenue mansion, filled with a century's worth of family secrets, Michele discovers the biggest family secret of all - an ancestor's diary that, amazingly, has the power to send her back in time to 1910, the year it was written. There, at a glamorous high-society masquerade ball, Michele meets the young man with striking blue eyes who has haunted her dreams all her life. And she finds herself falling for him, and into an otherwordly romance.


Soon Michele is leading a double life, struggling to balance her contemporary high school world with her escapes into the past. But when she stumbles upon a terrible discovery, she is propelled on a race through history to save the boy she loves - and to complete a quest that will determine their fate.


Timeless is one of the first time travel stories I have ever read and I must say, I really enjoyed it!

The overall concept of this novel is simply fascinating to me. The idea that a diary can transport a girl between multiple time periods, launching her into a world where her true love is alive... very cool.

Alexandra Monir flawlessly transitioned between the different time periods. There was clearly a lot of thought put into each one of them and it was very easy for me to differentiate between them. For example, a lot of the lingo from the Roaring Twenties? Yeah, I recognized that! New York City was described with vibrancy, making the city seem glamorous and lush. It's crazy - this is the second time in a few days that a book has made me want to go to New York (the other was Dash & Lily's Book of Dares if you're curious).

I liked Michele's character. Even after the tragedy that is mentioned in the summary, she keeps going and tries to stay positive. She is thrown into an unfamiliar, overwhelming environment and I really feel she did a good job adjusting to it the best she could, even if she sometimes had to escape to the past.

The only part that really fell a little flat for me was Michele's friendship with Caissie. It's not a huge part of the overall storyline or anything (at least in this book) but I feel that while there was a lot of potential, Michele only seemed to rely on Caissie to get her out of difficult situations. I mean, I think it's great that they can help each other out and all, but there needs to be some deeper substance to their relationship before it can grow into that. That might just be my opinion, though and it definitely wasn't a hugely distracting portion that took away from the story.

The ending! Woah. Okay, who saw that coming? I sure didn't! I am really excited to see where the story goes from that point in the next book.*

Overall, I would really recommend giving Timeless a try. It is a fresh take on meeting your 'true love' that gracefully tosses together past and present, tied together in a neat bow with a paranormal twist.