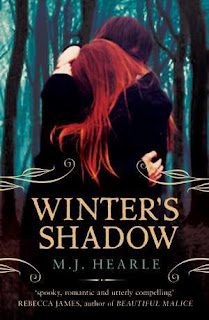 But Blake isn't all that he seems. There is a strangeness about him, something dark and otherworldly. Something dangerous. In his attic is a secret he would kill to defend, but Winter seems to have a special ability to make him forget his duty. And he is her only protection against the gathering darkness.

The only problem is, to protect Winter, Blake must risk exposing her to an even greater danger. Himself.


This isn't actually being released where I live (Canada) as of right now, but it will be out June 1st in Australia! It looks really good and I love the fiery red hair on the cover. What are you waiting for this lovely Wednesday?
﻿
Posted by Sonia at 18:10